And The Winner Is...

But first, our very busy week so far. We're three-quarters of the way through a solid stretch of digging, in which we've now doubled the width of the North-South trench in order to catch the eastern face of the house. We've also started two new units to the north and outside the house in order to see differences in the interior vs. yard scatter artifact assemblage. The real challenge has been taking out the quarry debris layer (Master Context 005), which thickens to more than three feet in the center of the house interior and is a bear to dig through. 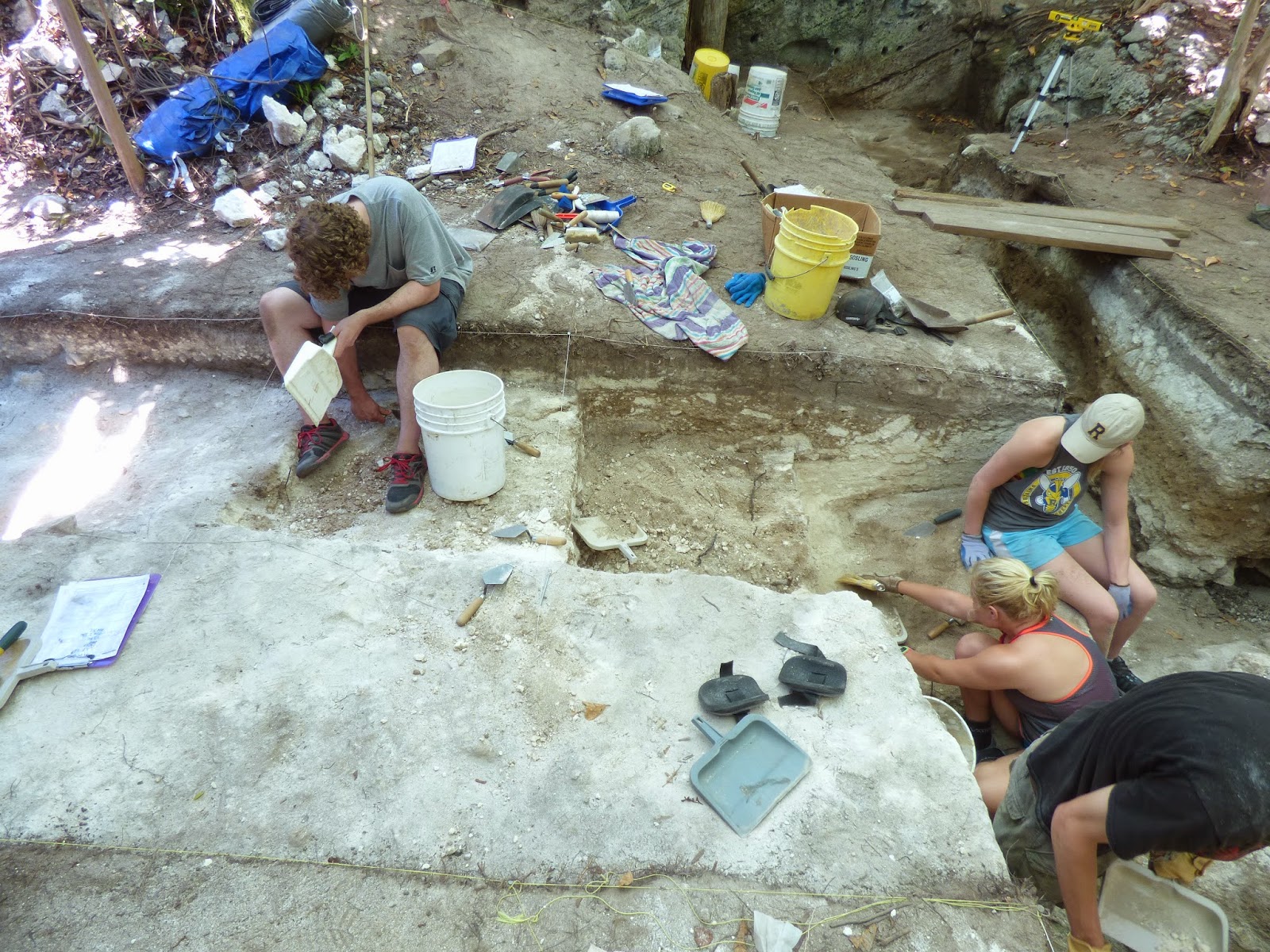 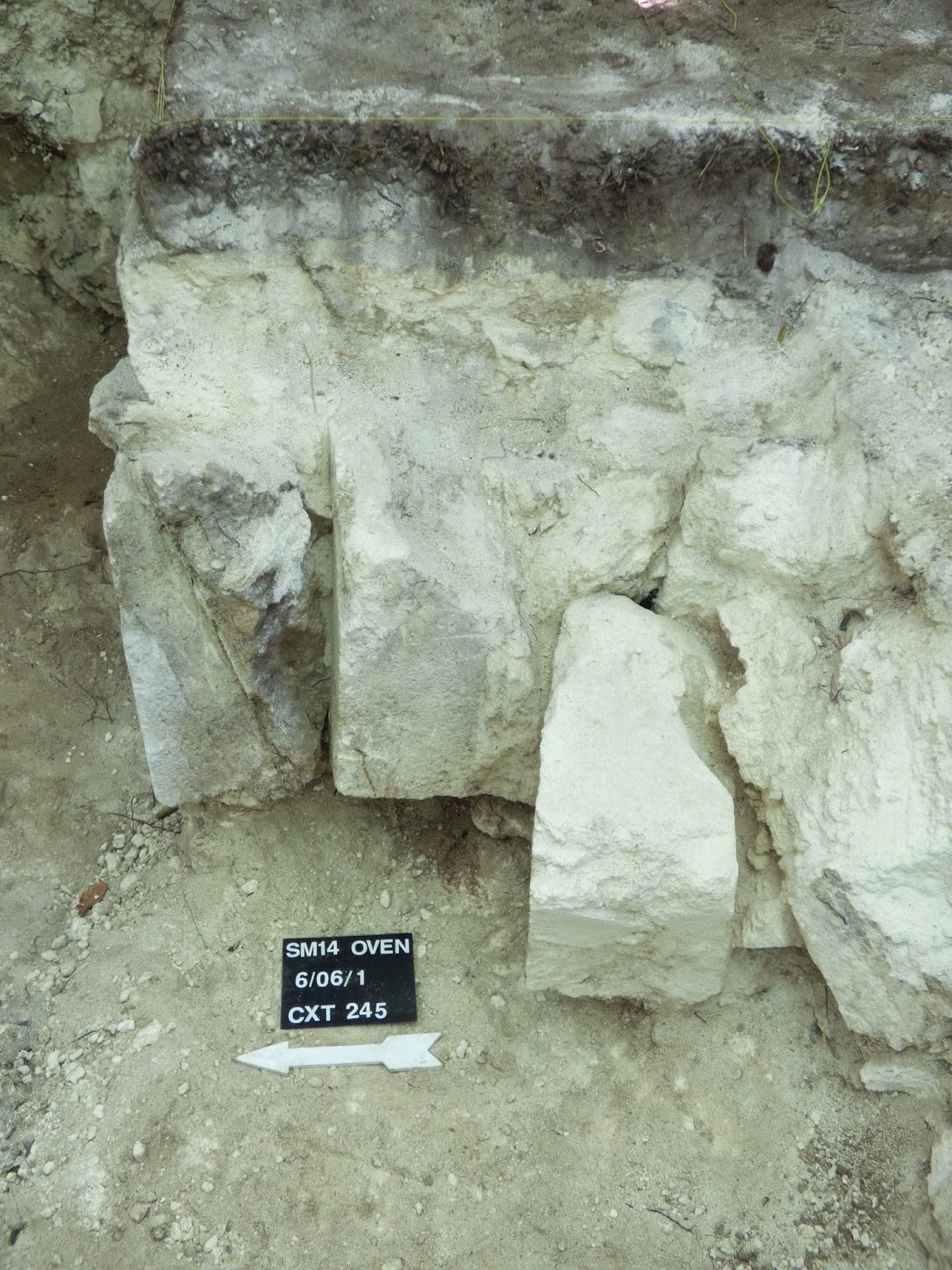 We've worked down through this formidable obstacle from north to south and west to east, identifying the top of our 17th c. floor layer (Master Context 006) sequentially unit by unit. As it turns out, this floor surface dives as we move south, meaning the quarry layer becomes ever thicker - exactly what you'd expect, actually as the quarry workers filled in the open hole left after the Oven Site house was dismantled. The top surface is packed down pretty firmly, and if I encountered it in any other context, I'd likely conclude it was Bermuda bedrock - but beneath this weathered surface it quickly becomes crumbly and is a mix of broken off-cut fragments and very large but irregular cut stone blocks. Luke and volunteer Mark O. today did yeoman's service working through these in unit S1 E7, a foreshadow of what's to come in the other squares.


Nearby, Judd and Andrew took out similar quarry fill next to the stair footing that Jonathan Z. found last year, following a perfectly straight wall that forms part of the room projecting east.

So it's tough going, with very few artifacts but necessary to get to the "Promised Land" of that artifact-rich floor layer! I keep promising the students it will all be worth it, but some are starting to question the hype!

To catch up on what we've already dug (35 contexts thus far) and prepare students for identifying the range of artifacts we hope to find in the floor layer, we had a lab evening on Thursday to go over artifact washing protocol. 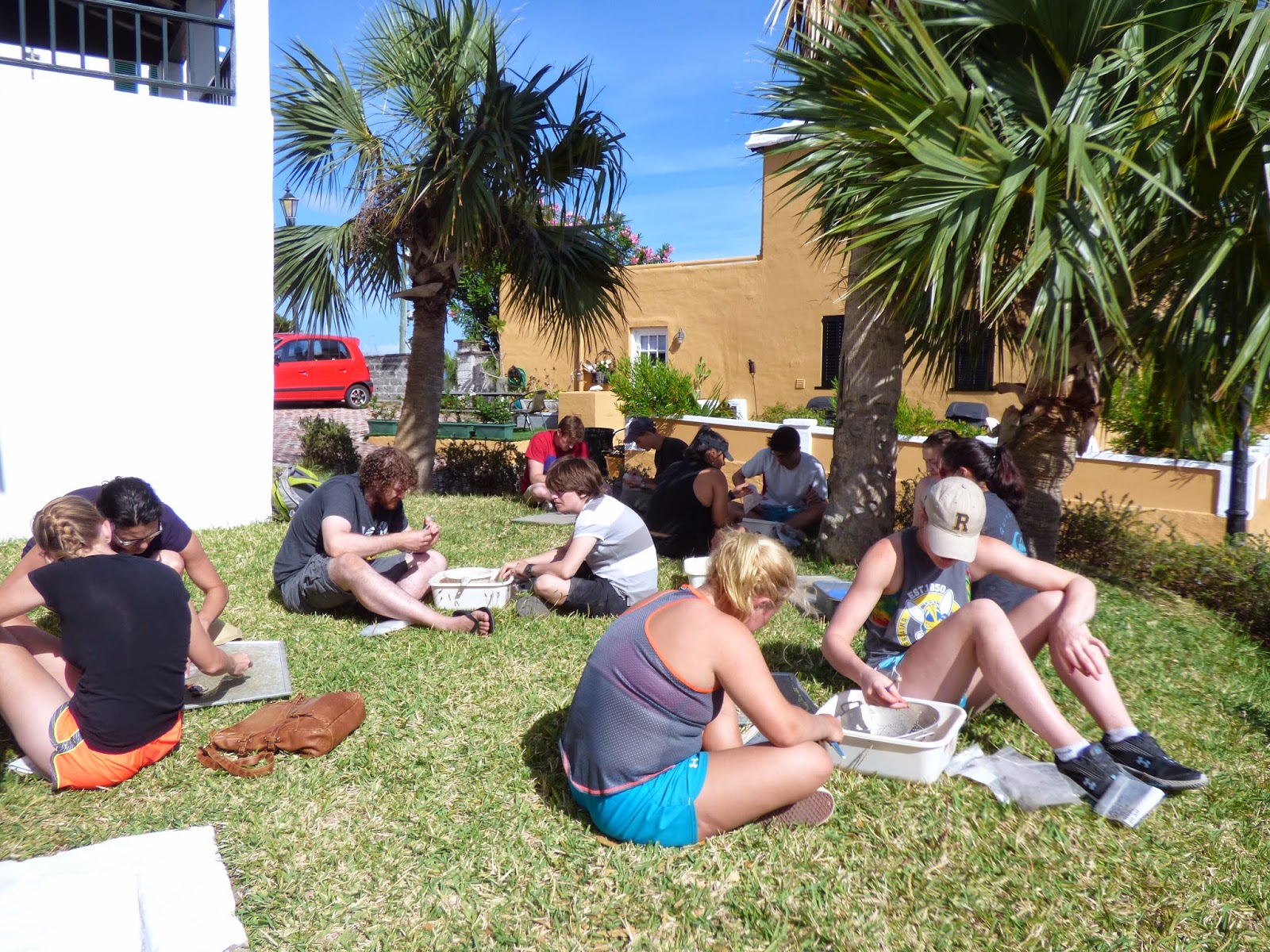 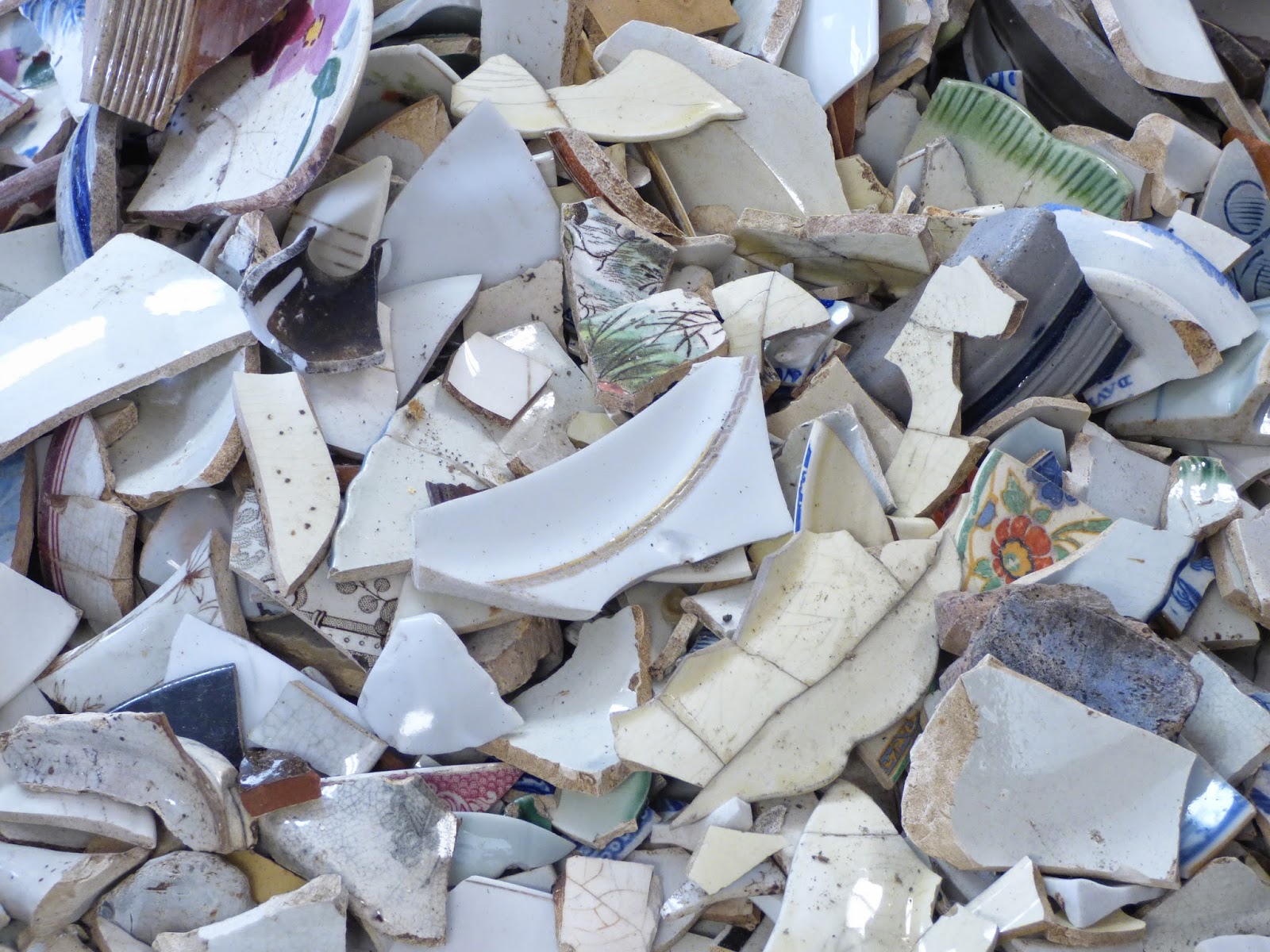 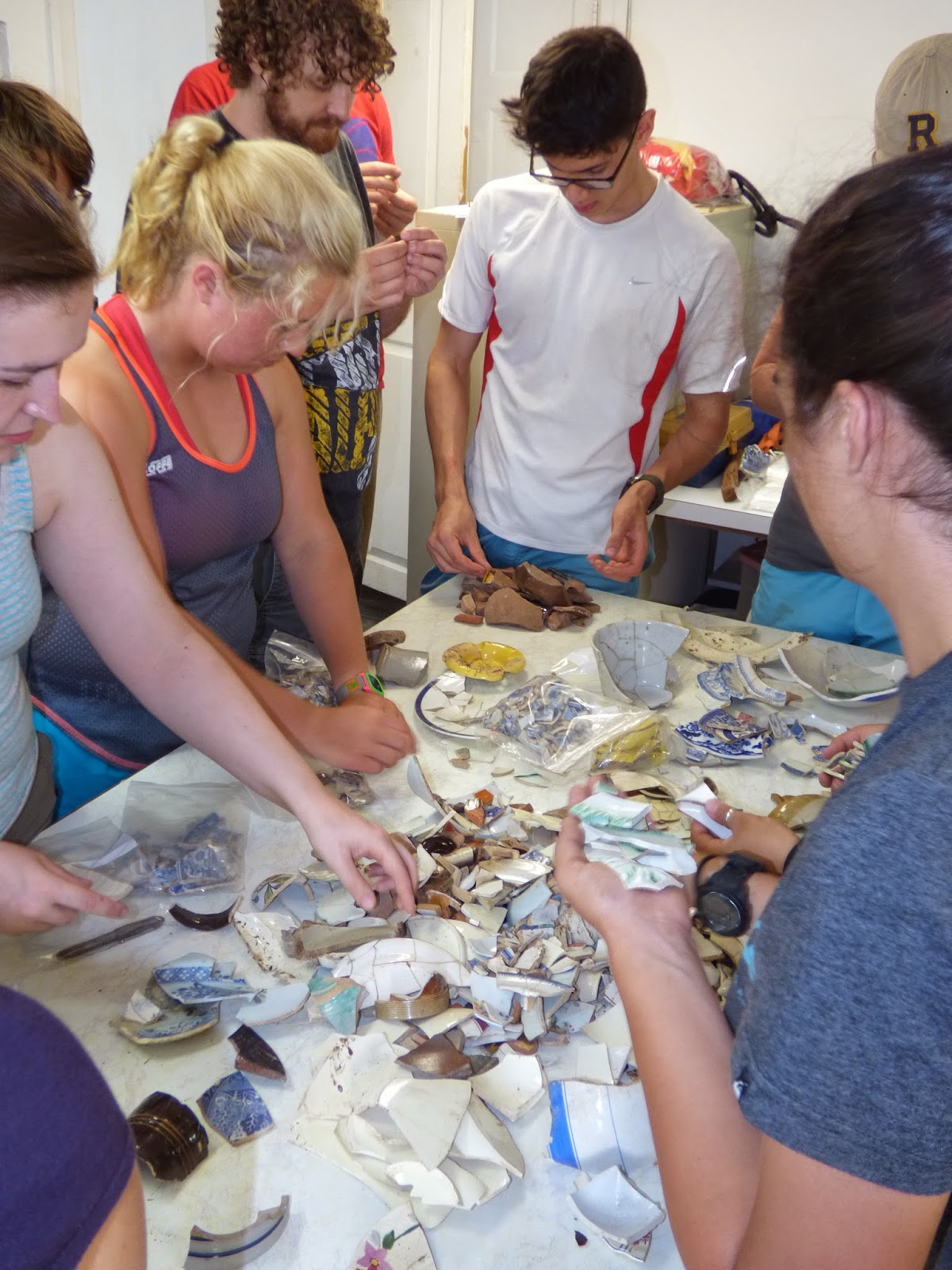 We were also fortunate to learn ceramic identification first-hand using a large but completely undocumented collection of 17th- through 19th-century artifacts from Rose Cottage in Devonshire, which the students sorted into earthenwares, stonewares, and porcelain and then differentiated these into various ware types. Wieldonware, anyone?

Besides excavating, today we ended a bit early and toured Bermudian fortifications on nearby Paget Island (Thanks Officer Norman!), starting with 400-year-old Fort Paget and then moving up the hill to Fort Cunningham, with a pause in the moat to scamper along the massive RML cannon there. 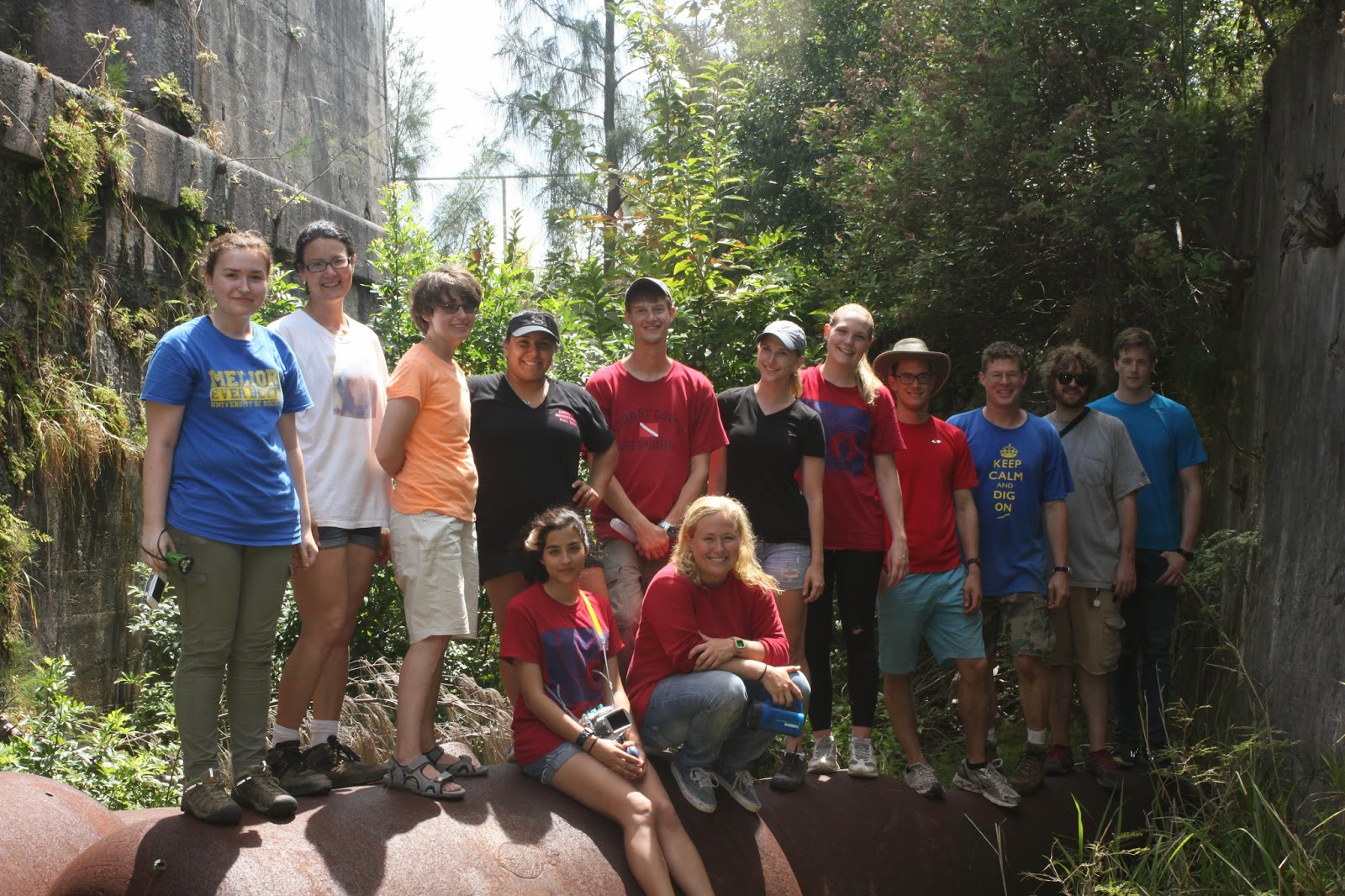 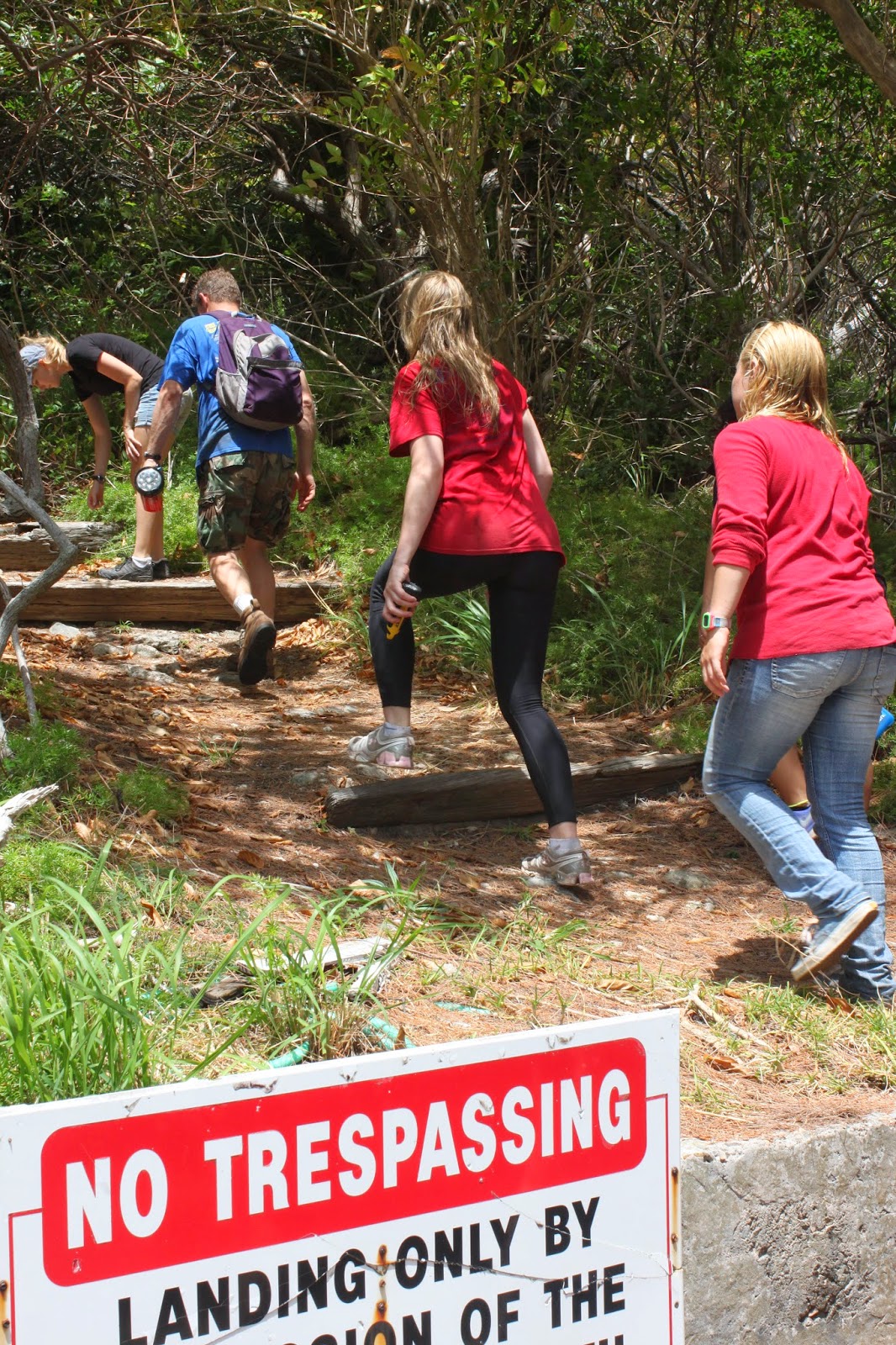 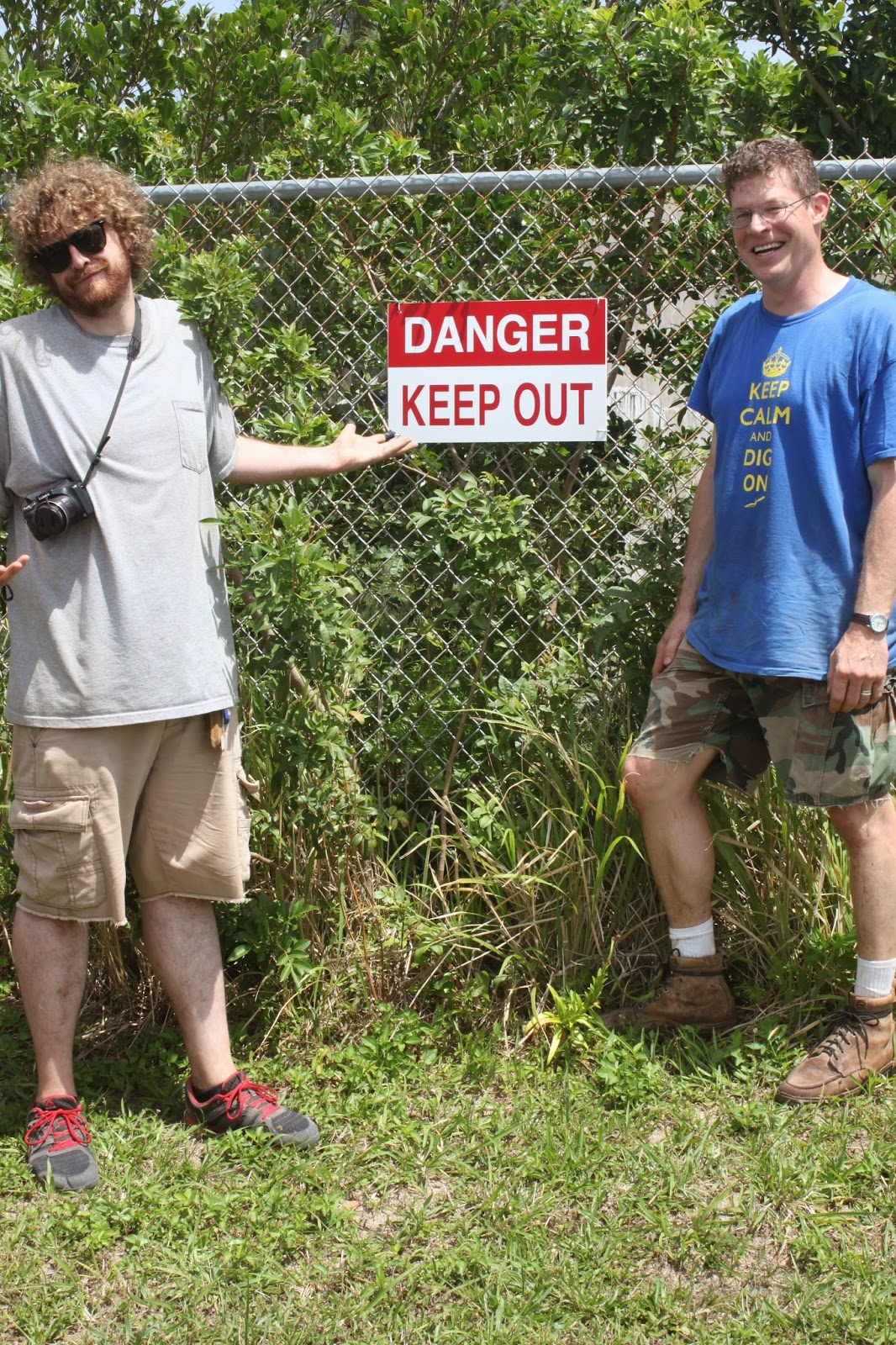 We've also had several Bermudian volunteers come out this week - Xander and Roger are both only one more digging day away from earning their exclusive "Licensed To Dig"(TM) field school shirt, and Mark, Sarah, Tawana and Shannon are off to a good start. Heather Kopelson, a fellow historian of Bermuda at the University of Alabama, is also here this week digging with us. 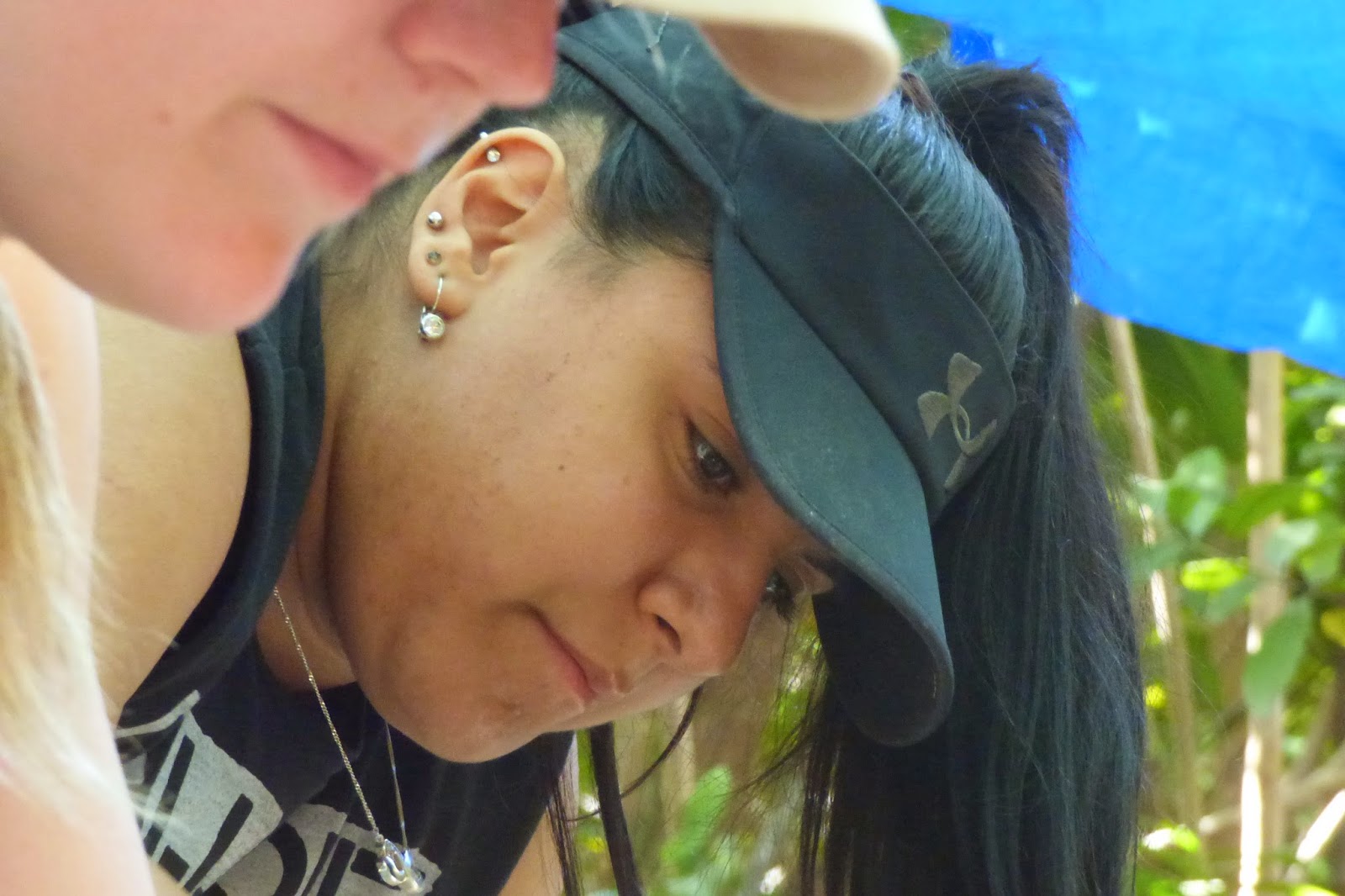 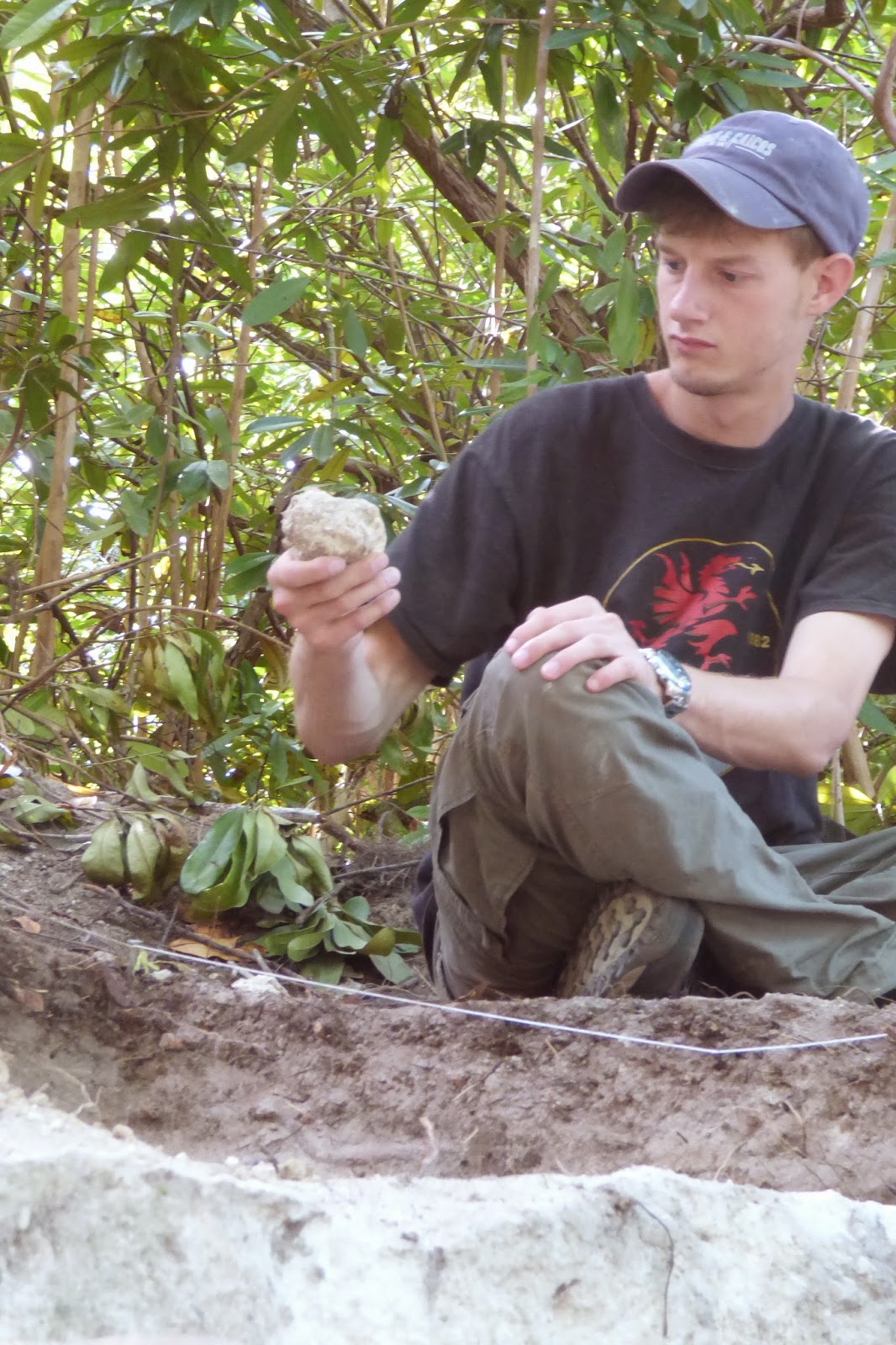 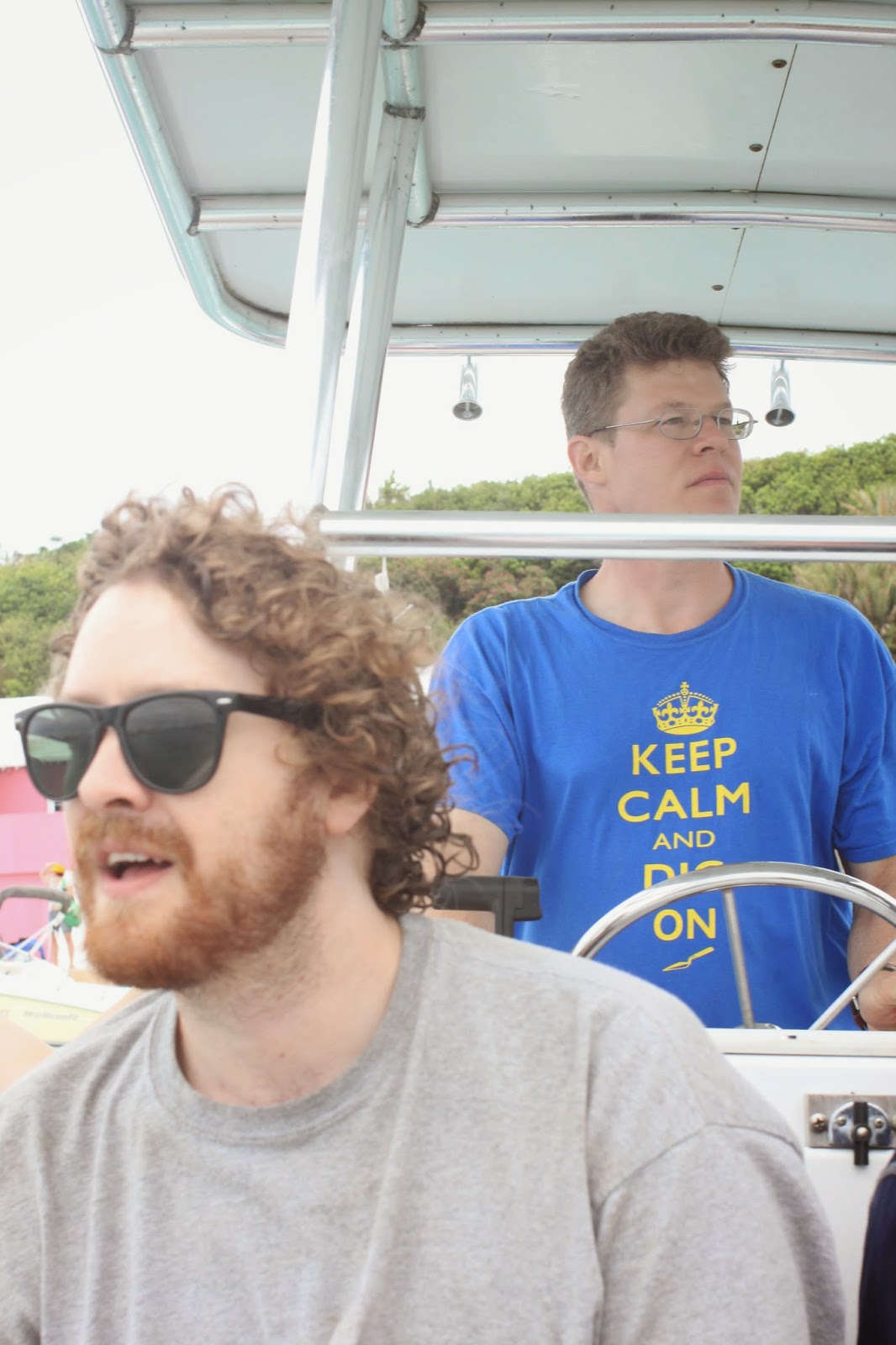 sams mom said…
Wow I have leaned so much on this blog. I really did not want my daughter to do this dig but I was so wrong! From this blog I see why she is loving this. Thanks again for updates!
June 7, 2014 at 1:52 PM 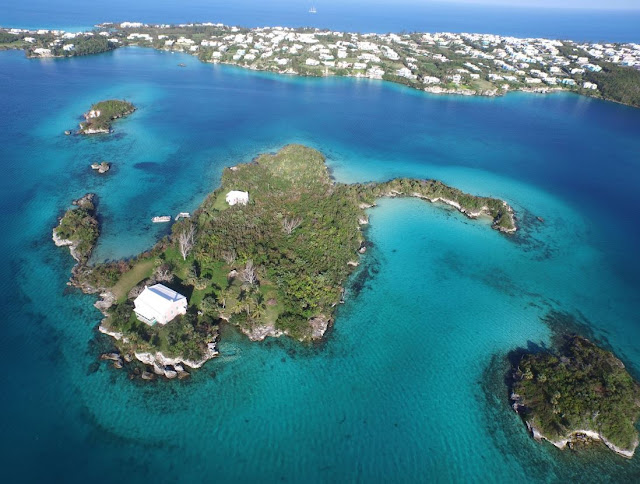 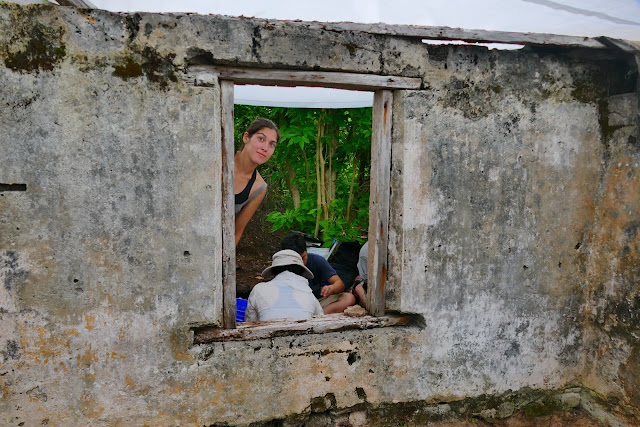 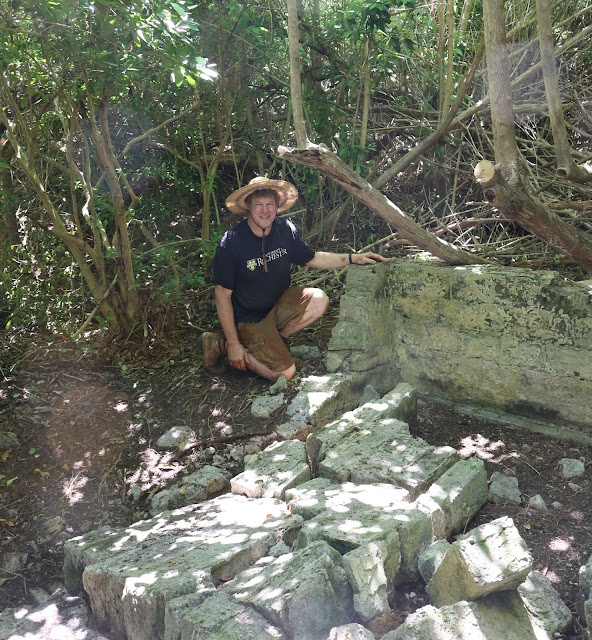